Did we evolve linguistic abilities from great apes? 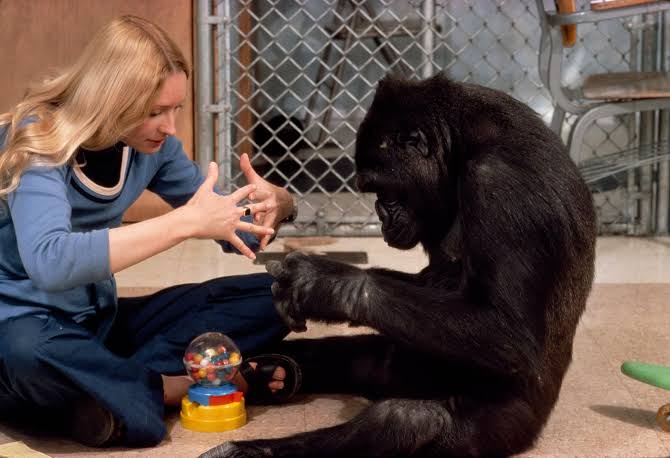 The planet earth is full of communication. Birds chirping in the morning, vervets producing predator specific alarm calls, honey bee dancing in the beehive and a host talking to a guest in a talk show are all the examples of communication both human and non-human. All creatures on this planet are constantly exchanging information with one another via a broad variety of channels. 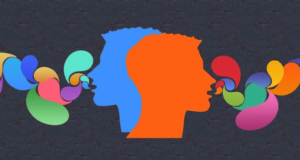 However, there exists a huge difference among communication channels of human and non-human creatures and human language is greatest evidence of this fact. In fact, human speech is one of the main dividing line between humans and the entire animal world. Our ability to speak is not merely a method of communication but its what that paved the path for our all other special abilities and lead us towards a journey of developments and discoveries. Unique properties of human language like arbitrariness, discreteness, displacement, productivity, semanticity, and duality of patterning are what that differentiate it greatly from all forms of animal communication and that allowed for expression of complex pieces of information and ideas.

So, it really counts what we have done so far with the help of human language; and when we think it this way, we are really curious about the roots of human language i.e. how it originated and how it evolved.

Concept of evolution helps us in studying origin and development of human language. As far as we know that every specie communicates through one way or other, we can trace the origin of human language by studying the animal communication. Among non-human primates, apes have communication skills resembling humans and from these great apes Chimpanzees are thought to be closet relative of humans having DNA identicality of approximately 98.4% with respect to single nucleotide polymorphisms. This is why, researchers try to find the roots of human language by studying communication methods of chimpanzees and other great apes. Another reason researchers consider studying chimps and other great apes for discovering evolution of human language is that apes have manifested high level of linguistic intelligence(defined as our ability to use language to influence others, the capacity to remember information, the capability to use language to explain different scientific or other concepts precisely  & finally the ability to understand & analyze the language itself) than that of other non-human primates and all other animals. 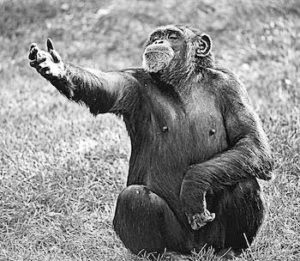 Great apes usually use sign language; they seldom use vocalization; their gestures play a vital role while they communicate with each other. Other than chimpanzees, great apes are relatively silent; in other words, chimpanzees are the noisiest apes. Chimps use number of different sounds for expressing their emotions rather than communicating a message. For communicating their message wild Chimpanzees have been exhibited to use 66 different hands signals and movements e.g. lifting a food toward other member mean: climb on me and striking their mouth mean: handover me the object.

The sounds that chimps make for expressing emotions are genetically programmed, these are the products of subconscious emotional system. While signaling is the product of conscious cortex i.e. gestures and facial expression that chimps and other great apes use for communication are exchanges of information, used by them deliberately and consciously. A form of intelligence lies behind each exchange and that makes great apes most social animals of all others. Recent researches on great apes communication indicate that these animals use simple signs to communicate messages and are also able to develop their own signs and gestures

During 1960-1970, research on great apes demonstrated their impressive communication skills that opened doors for further research in this area. Koko, Kanzi and Washoe are among those famous apes researched and trained to enhance their sign language and linguistic capabilities.

Koko, a low land gorilla, was just an infant when he was introduced to Francine Patterson. It was actually the 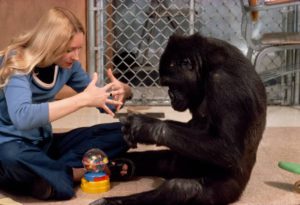 subject of his Ph.D dissertation whose topic was about the possibility of teaching sign language to a non-human primate. Francine spent most of his free time with Koko and taught her signs at every opportunity. As a result koko developed the ability to communicate using sign language not only with Francine but also with other caretakers. As of 2017, Koko is now 46 years old and possess a vocabulary of over 1000 words. This is the most extensive vocabulary developed by any of the non-human primate learner. This work exhibited mental abilities of non-human primate that were thought impossible before. A famous incident about Koko even exhibits extraordinary cognitive ability of Koko that was developed as a result of her understanding of sign language. One morning, a caretaker joined Koko, he found a broken container there, he signed Koko who did it. Koko signed back, other caretaker did it, but her action had been videotaped and that recording showed that in fact Koko broke that container, she not only exhibited the ability to understand and answer a question by signing back but also lied to the caretaker as most children do in order to avoid punish and blame. Thus her developed linguistic intelligence played a role in enhancing her other abilities also.

Kanzi, a male bonobo, has been a subject of many researches on linguistic capabilities of great apes. The story 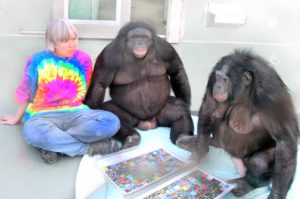 of Kanzi is very interesting, when he was very young he had been with Matata during her class where she was taught language through keyboard lexigrams (Matata is the lady who adopted Kanzi). One day when Matata left him for a while, he surprisingly started to play lexigram showing her understanding and usage of elements of human language. Not only he was the first among great apes who learnt through an indirect learning session but also a quick learner who soon learned ten words using lexigram and now he has a vocabulary of more than two hundred words that he understands and communicates using lexigram. Whenever he listens a spoken word, he touches on the correct lexigram

Washoe a female Chimpanzee who was the first non-human primate to learn American Sign Language. She learned more than 350 words of this language and later taught some of these signs to another chimpanzee who was actually her adopted son.

Our close relative, the chimps not only employ many diverse gestures and facial expressions to communicate but also able to develop their own special signals, that makes them linguistically most intelligent animal than any other animal of this planet. Furthermore, intelligence that lies behind their appropriate interpretation of the signals relayed by their fellows is also exemplary in the animal world. They are intelligent enough to interpret whether sounds produced by their fellows require certain actions or these are just expressions of their emotions that don’t require any response at all.

So, how do we evolved our linguistic abilities from great apes.

While we as homo sapiens primarily relied on gestures to communicate with one another, then our ancestors started producing sounds and moved towards vocalization gradually, generations over generations for uncountable years. As a result, about 50,000 years ago (only recently), our larynx evolved by descending 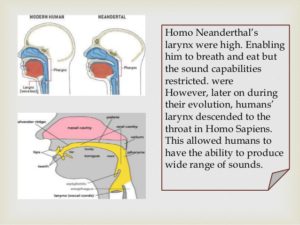 deeper into our throat cavity, enabling amazing flexibility in reverberating and making precision sounds. This particular evolution transformed our physiology allowing us to vocalize everything. And now we believe that we have instinct for language, this is why children learn language effortlessly in early years of their lives

So, if linguistically we evolved from great apes then why their communication lacks the characteristic feature of human language? Does not it point toward crucial gap in evolution referred to as evolutionary discontinuity?

According to his view point, we must not focus merely on the concept communicated and interpreted by a specie, we must  also focus on their cognition. If a specie is not able to communicate a concept that does not mean it lacks that concept, this concept would be lying somewhere in their cognition.  So, it’s wise to find precursors of human language in animal cognition rather than their communication

So, animals have basic mental models they are born with, and great apes, most significantly the chimps, are able to develop new mental models. It does not matter, they communicate or not, mental model exists in their mind, if we think it this way, we find answer to our question to evolutionary gap or evolutionary discontinuity.

2. Tecumseh Fitch, Animal cognition and the evolution of human language: why we cannot focus solely on communication